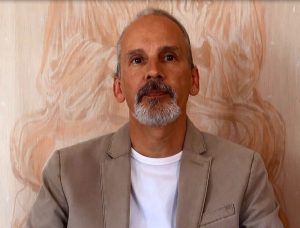 Initiated into a practice of meditation at the age of 18, Thierry Vissac immediately engaged in the study of the Vedic tradition of India with masters such as Maharishi Mahesh Yogi, Brahmachari Nandkishore, Brihaspati Dev Triguna. He attended meetings with Deepak Chopra in the United States in the mid-1980s, followed by a year-long monastic experience in Holland, before founding his own meditation center (Vedic Academy) in Paris in the late 1990s.

Yet it was when this meditative path, which he had been faithful to for more than 20 years, collapsed that he felt reborn. The mental constructions, the spiritual ambitions, the dogmas, the routine rhythm of his practice collapsed at once as a result of disillusionments which in the end turned out to be his best spiritual guides.

After a period of silence and deep bareness following this « salutary collapse », the desire to bear witness naturally imposed itself in the first days of the 21st century, outside of any comforting frame and tradition, so as to offer a refined look on the spiritual quest to all seekers regardless of their paths and invite them to a benevolent encounter with what they fled in their quest.

Thierry Vissac can now interact freely with the representatives of the oldest traditions (he was, among others, welcomed in 2008 by Arnaud Desjardins who wanted to meet him at his spiritual center in Hauteville), at the same time that he feels close to those who have never attended any school.

His proposition is of a « spiritual » nature in the sense that it does not generally concern itself with relational problems or the practical questions of everyday life, but with the essential dimension of existence.

His learnings and falls were the ferment of awareness that gave a « foundation » to certain values in him. He found similarities in various approaches but his proposal is based on what he calls « the intelligence of life », rather than on a memorized reference system (by which he means that every moment, every encounter has its own intelligence, its own spontaneous teaching).

As a spiritual guide, Thierry Vissac shares his vision through books, meetings and workshops since 2002 to accompany other « collapses » that he sees as inevitable in the times we live.